Why Is It So Hard for Women to Support Other Women? 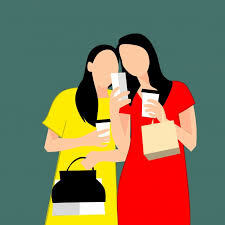 This new decade has brought about fifth wave feminism and the “Girl Boss” movement, all with the intentions of making true equality for women, not only politically but socially too. As much as I love the feminist movement and believe it’s doing good for women around the world, I still think it’s far from perfect. Sadly, it’s still extremely difficult for women to support other women, and we keep finding new ways to tear each other down.

The number one way women allow themselves to fall into the trap of putting down other women is name calling. There are an endless number of derogatory words and phrases that have been created by men and women to shame women for enjoying things. Most of the terms are directed towards women who have embraced their sexuality and are living a sexually active life. Of course there’s a double standard to this, as women who commit the same sexual acts as men are burned at the stake by their peers, while the guys get praised by their buddies for being “players.”

However, it goes much further than just hating on women for their behavior with men. It’s now expanded into making fun of women for their interests and putting them into categories that generalize all women who like certain things. It originated with the phrase “basic.” I dislike this phrase for a lot of reasons, one being that if a girl is basic it essentially means she has no personality or value because she is similar to other girls. This doesn’t make any sense to me because when guys wear the same clothes or do the same things, it makes them cool and part of a group, but basic girls are just sheep following the leader. It also creates a divide between high school girls who don’t want to be seen as basic by boys, causing them to play into the idea of making fun of girls who wear those trendy or popular clothes.

And while it’s good to want to be original and stand out, it can also be harmful to do so by putting down other girls. A popular type of girl has been in the rise lately on social media, and that is the “Pick Me Girl.” This is a new term for girls who want so desperately to be different from other basic girls that they then join guys in making fun of them or making sexist jokes. They come off as chill and not as uptight because they don’t care if guys make sexist jokes around them, so then the guys don’t feel like they’re being nagged by someone to stop being offensive. It’s a dangerous role to play, as allowing boys to act like this way and pretending you find these clearly immature jokes funny only reinstates that idea that women should be complacent to those harming us.

However, I don’t think it’s the girls’ fault entirely or that we should then attack them, because that would only continue the chain of tearing down each other. I think we should look at why girls feel the need to make themselves play into that role. It’s not because girls truly hate other girls, but I think instead it’s a need that’s been ingrained into us to please men’s ideas of how women should act. It’s not like any girl is born thinking that they need to dislike one another, but as we get older it becomes more and more standard for us to want to live up to men’s standards rather than living to be friends with each other. This is something that needs to be changed at the basic level, and it’s something that can only be changed through teaching the next generation differently.

Another role that women have been put into in recent years is the role of the “Cool Girl.” (If you would like to see a great example of someone explaining this concept listen to the monologue by Rosamund Pike from the movie “Gone Girl.” It perfectly explains what men mean when they say someone is a cool girl.) For a quick definition, though, it essentially means a woman who is not going to complain or be prudish to anything a man asks of them. While it is seen as a compliment at first glance, it essentially means, “She’s not difficult.” It is not a compliment to be called “easy” because that just means men appreciate the fact that you won’t call them out for their mistakes or get mad at them when they’re in the wrong. They don’t want to be held accountable for things that will make them feel bad about themselves, so when a girl is cool and laid back, they get off the hook.

These aren’t the only ways women are divided into groups; there are also the subcategories of alternative girls, nerdy girls, and other types of interests different girls have. At the end of the day, it’s all the same, and they just end up getting clowned on by boys who don’t want women to enjoy the things they enjoy peacefully. The real damage, though, is when girls participate in this type of division between themselves.

A quote I particularly like about this phenomenon is from the movie “Mean Girls,” which is surprisingly a very deep movie when you take a close look at the statements it makes about how girls treat each other in high school. The quote isn’t exactly appropriate, language-wise, but it essentially goes, “You all have got to stop calling each other hurtful names. It only makes it okay for guys to call you hurtful names.” This astounded me when I heard it in the movie because despite its comedic timing, this statement was very profound and true. If girls were to stop referring to each other this way and letting it be the norm, they would no longer have the power they hold over women.

I know it’s extremely unrealistic to expect everything to change overnight and the feminist movement to become powerful suddenly. Even I have trouble not giving in to the kind of talk that promotes these divides between us, because it truly is drilled into high school culture. That can’t stop us from trying, though, because in all honesty, the only reason that women don’t have equal power to men is because we are constantly fighting each other instead of fighting the bigger problems that are created by the patriarchy. It’s time to stop looking for other women to blame for men’s mistakes, and time to start wondering why that is our immediate response.