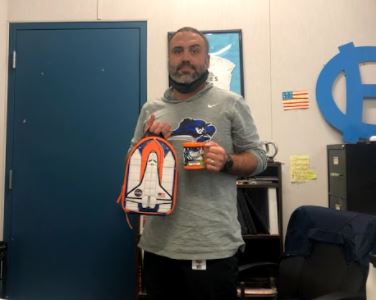 You may have heard that Dan Corley worked at NASA before his job as assistant principal at Central Hardin. Despite popular belief, this is not true. Unfortunately, Corley was not an astronaut and has never been to space.

Principal Tim Isaacs started this somewhat of a rumor when introducing Corley to Central Hardin in 2017.

You could say, though, that this rumor is not completely false. While working at North Hardin, Corley had an opportunity to work as a program manager for a new company created by government contractors he previously had connections with. Taking this offer, he became in charge of tasking engineers, managing contract details, and creating schedules at this company.

Under this company, Corley worked for Air Force Research Labs (AFRL) and Intelligence Advanced Research Projects Activity (IARPA), who hired NASA to consult on the project they were working on.  This project was the Great Horned Owl, which iarpa.gov tells us is a “program [that] seeks to develop technologies that significantly extend the operational endurance and payload capabilities of ISR (Intelligence, Surveillance, and Reconnaissance) UAVs (Unmanned Aerial Vehicles).”

So, while Corley has had connections with NASA and has worked with them, he was never Neil Armstrong.

“The fact that people think I worked for NASA isn’t a bad thing,” Corley said with a laugh.  “Of all the rumors that could be going around about you, that’s not a bad thing.”