Eyes on the Prize

How the Lady Bruin Volleyball Team Achieved a Historic Season 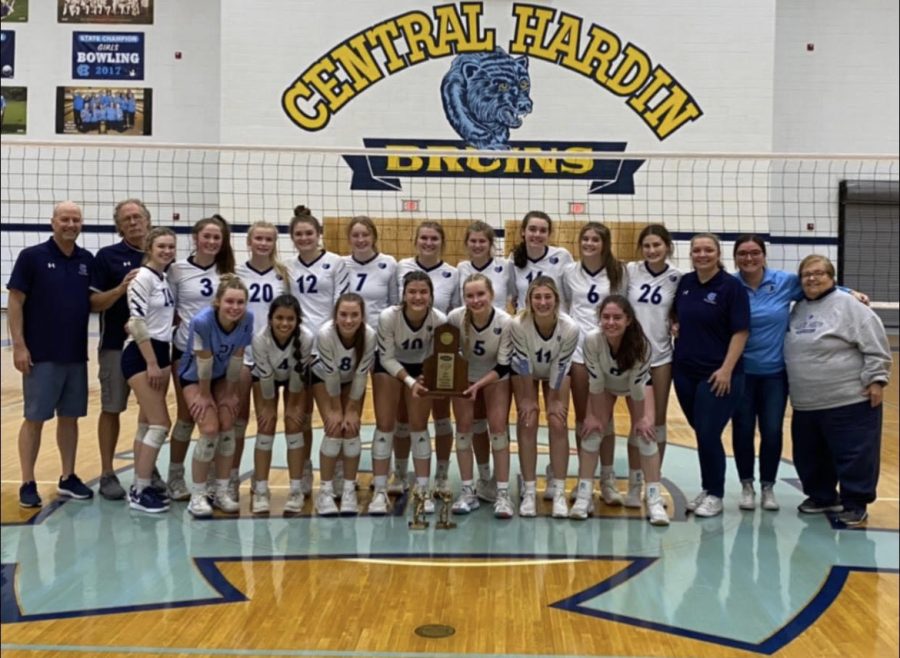 The Bruin volleyball team after claiming the 5th region title.

The Lady Bruin volleyball program has upheld a tradition of impressive records and snagging titles year after year, but the 2021 season was nothing like anything anyone had ever seen before.

Head coach Bill Rineker has been coaching volleyball for 19 years and has been the head coach of the Bruins for 10 of those years. Even he is amazed by this group of girls.

“There were times when I wanted to pinch myself and go ‘is this real?’” he said.

This seems like an obvious response when your team breaks five impressive records.

This record, Rineker attributes to the family dynamic of the team.

“They all made each other feel like they mattered,” he said. “They never put their head down either, they always wanted to know what the next record they could break was.”

This love among teammates was most authentically displayed through the dynamic of the players on the bench during any given game.

“When a kid who is never going to step foot on the court roots just as hard as the girls who just made that great play, that’s when you know it’s special,” Rineker said.

Some may believe that the Bruins didn’t face many challenges when it came to their game play, but after losing some of what the community saw as the biggest assets to their time, there was talk of if the Bruins would not be as impressive in the 2021 season as they had been in years prior.

“You know I heard the rumors,” Rineker said. “People said ‘now that Kelsey (Brangers) has graduated and some of those other great players are gone, Central Hardin won’t be good.’ People didn’t understand what this group was going to bring to the table.”

The Bruins had a point to prove to their doubters, and prove it they did.

“It was very competitive, but we were all pushing each other to do our best,” senior Lauren Thompson shared.

With the core values of love, encouragement, and determination, the Bruins were propelled into what became a historic season.

Senior Lauren Vest said, “We are a family.”

This culture of spirit and pride helped the team to break multiple records and reach the final four of the KHSAA state tournament.

“That’s the farthest anyone in our region has gotten,” Rineker said. “You know, we were the last public school standing, that’s something to say in itself.”

Senior Alexandra Mackey said that this season was “unforgettable” when she compares it to her eight-year volleyball career. “There’s no way I can pick just one moment out as my favorite.”

With a nearly perfect 34-1 regular season (shattering the previous 19-0 record of best start to the season, initially held by Elizabethtown High School) the Bruins continued on their triumphant season to claim the 17th District and 5th Region titles

Senior Brooke McElfresh says that this season taught her how to “leave it all on the court,” which, there’s no denying, the Bruins did.

Coach Rineker says that looking to the future of this program, this season will leave a lasting impact.

“We always say that tradition never graduates,” he shared.

It’s safe to say that this team is not just leaving a legacy of phenomenal wins, but also a culture of family, acceptance, and drive.